Maintaining this House is Something Else!

I haven't written in a few months but that's not because I had nothing to write about. We have been in the house over 3 1/2 years now and there are certain things that need fixing. Some are regular maintenance items and others are just surprises. Let me give you a quick rundown of what's going on.

Exterior Paint - The South sides of the house start to fade due to the constant sunlight received throughout the year. On average, we have been needing to paint the South side of the house every 12-18 months at a minimum. For this we are using a clear coat of Varathane on the shingles and the bark-colored Cabot stain on the redwood trim. Just last year I had the garage door sanded down and refinished along with the house as it was fading bad with only a clear coat on the mahogany. I had it stained and recoated. Now it looks like a million bucks.

Tankless Water Heater - Once a year I have to flush the tankless water heater with vinegar. It's not difficult to do but just another thing to do.

Hot Tub Pump - I just had the hot tub pump replaced with about 3 months left on the warranty. Whew! Apparently, it's better to keep the water pH on the high side to prevent corrosion of the parts.

Stone Facade on Hot Tub Door - I built a wall surrounding the hot tub but needed to leave one side open so it could be slid into place. I had a 3-sided wall and wanted to close off the fourth side. We devised an extremely heavy two part door on heavy duty hinges. When I had to open the doors and put them back for the recent hot tub servicing, I had a problem getting the doors to shut. Apparently they weigh so much (maybe 200 pounds each) that the hinges were bending. With some finessing and a lot of brute force I managed to shut the doors again, however, some of the stone facade attached to the face of the doors fell off and now I have to fix it. Not only that but two fingers were crunched in the doors when they finally shut. Not fun!!! Note to self....get others to help shut the door so you don't create more work by having to replace stone. 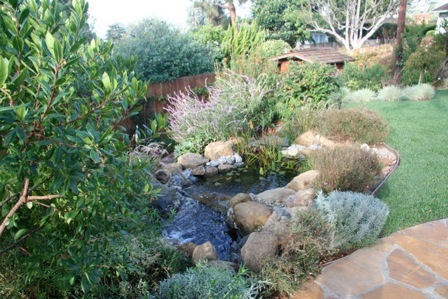 Koi Pond - The koi in the pond are HUGE!!! I'm glad to see the pond thriving but that being said, I just got through my annual cleaning of the pond. It costs about $650 per year! They take out the fish, scrub all of the algae off the rocks, clean out the filters, check everything, and refill it. I'm sure there's more to it than that. It takes 3 guys about 4 hours. See the koi pond cleaning here. But wait, there's more. The lights in the pond are failing and I have been told that the new lights out now are the way to go and will last for 10 years or so. So there's another grand or so. Stay tuned. 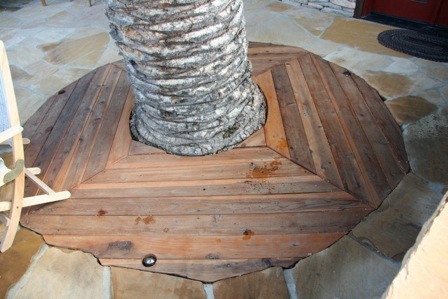 Wood Deck around Palm Tree - Do you remember the palm tree in the backyard that we basically built the house around? Well, you may also remember that I had a wood deck built around it in 4 pieces to maximize the patio usage. It was a very nice fit but as the tree continued to grow about 18 inches per year, the base kept getting larger and the surface roots started to lift the deck. Last year I lifted the 4 panels, trimmed the roots around the tree, and enlarged the hole. Well, it's time to do it again. This looks like an annual event.


Now after all of these things, people always say "you wouldn't do it again, would you?" I would do it all over in a second! I love this!!!