The silhouette finally can come down now that we waited the 15 days appeal time following the Planning Commission meeting.

Posted by Unknown at 3:42 PM No comments:

Email ThisBlogThis!Share to TwitterShare to FacebookShare to Pinterest
Labels: Getting a Permit, Remodel, Silhouette

Today my architect, Olympia Greer, and I appeared before the Planning Commission.
Click here to see the meeting (44 min / 26.8 MB) and YES I know I move around too much in the presentation so please don't tell me.

In addition to the architect, I appeared before the board to counter complaints by the house next door to the North. The complaint was that ambient light would be blocked by the new house. I didn't sleep well the first night after hearing of the complaint but on the second night at 3AM I woke up with an idea. I went online and downloaded sun position data for the darkest day of the year in Los Angeles, December 21. Since this is the lowest the sun will ever be in the sky I could see what the worst case situation would be for the blocking of ambient light. I charted the sun position on overhead as well as side view charts showing both houses. It clearly showed that on the worst day of the year, the sun would go behind the top corner of the house from 2PM. At the meeting I gave each commissioner a set of charts and walked through them. Some were shaking their heads and making facial expressions that seemed to say "get a life", and "you can't dispute the facts". One commissioner thought they meant their view would be blocked. Three things, I believe, helped me.

1) They don't really have a view,
2) The house isn't in the direction of their view to the west/southwest, and
3) The written letter specifically said "ambient light".

Another complaint was by a neighbor to the southwest who complained that the house would look like a big apartment building. We accommodated them and put in a window and balcony to soften the appearance. I think I got the better end of the deal on that one.

Needless to say it was a nail-biter but we won approval by 3 to 2.

Posted by Unknown at 3:08 PM No comments:

The silhouette flags were readjusted to show the shallower pitch requested by the Art Jury. The entire roof design was changed.

Posted by Unknown at 2:49 PM No comments:

Email ThisBlogThis!Share to TwitterShare to FacebookShare to Pinterest
Labels: Art Jury, Getting a Permit, Remodel, Silhouette

The Art Jury reviewed the design today but had some issues. They didn't like the steep pitch of the roof and said the shed dormer made the house look like it was 3 stories, etc., etc. Back to the drawing board...

Posted by Unknown at 2:44 PM No comments:

Email ThisBlogThis!Share to TwitterShare to FacebookShare to Pinterest
Labels: Art Jury, Getting a Permit, Remodel

The Silhouette Goes Up 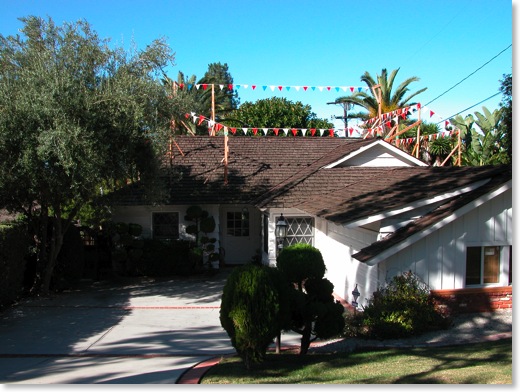 The silhouette flags were installed on the house today. This allows neighbors to see how the proposed house impacts the neighborhood.
For all silhouette pictures, please visit the Photo Gallery.

Email ThisBlogThis!Share to TwitterShare to FacebookShare to Pinterest
Labels: Getting a Permit, Remodel, Silhouette

The initial design is ready for the Art Jury and Planning Commission to review. The issues were that we were mixing Ranch and Colonial style features on the house and that we should pick one....so we picked Craftsman. In California, it evolved from the California Bungalow. Craftsman-style houses are evident all around the Los Angeles area and especially in Pasadena where Greene and Greene really developed this style from their Japanese and native material influences. The Gamble House is a big inspiration in this project.

Reviewed the initial design with the architect.

Email ThisBlogThis!Share to TwitterShare to FacebookShare to Pinterest
Labels: Getting a Permit, Olympia Greer, Remodel

Retainer Given to Architect

Today is a big day! A retainer was given to Olympia Greer, our architect, to start work.

After interviewing several people, we chose to go with Olympia Greer. We chose her because she has a great design sense and lives and works in Palos Verdes Estates.

Posted by Unknown at 3:06 PM No comments:

Before I get into the daily details, it would first be beneficial to tell you how the construction process works in Palos Verdes Estates. I found a great picture on their web site that is posted below. Basically, all construction needs to go through the Art Jury, part of the PVE Homes Association, and the the City's Planning Commission.

The first step is to get your drawings approved for aesthetics by the Art Jury. After their blessing, you can then go to the Planning Commission where they will weigh in on neighborhood compatibility, and listen to any neighbor's concerns. If there are concerns, you go before the Planning Commission and defend or compsomise on your position. The 5 members then vote to approve or deny your request for a permit. A majority of 3 members is required to grant approval.

Posted by Unknown at 2:53 PM No comments: